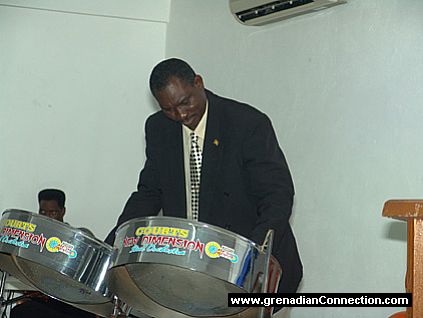 Grenada has lost one of its most influential and pioneering figures in the steelband movement with the passing this morning of David “Peck” Edwards who was associated for a number of years with New Dimension steel orchestra on Melville Street in the heart of the city.

Edwards, a long-serving employee at the Ministry of Culture, passed away earlier in the day after a battle in the last few months against cancer.

In paying tribute to “Peck”, the former ace pan arranger for Commancheros Steel Orchestra in St Paul’s, Cecil Noel said that despite the great rivalry between them on Panorama night, there was always an “excellent friendship” between the two of them dating back to schoolboy days in the 1970’s at the Grenada Boys Secondary School (GBSS).

“He was a really dedicated person,” said Noel who often came out second best to “Peck” in their rivalry on Panorama night during the annual carnival celebrations.

According to Noel, the late “Peck” would be remembered “as a man who really gave it his all (in) trying to help young people when it comes to the pan”.

He described the ace pannist as one who was “really dedicated” to the artform and saw it “as an avenue where young people could really put their energies into something positive”.

“He was a kind of no-nonsense guy when he was doing something – he really wanted to do it and give it his all,” he said.

“I think one of his greatest achievements is how he thought of young people and how he can work with them to make them really better off not just playing pan but generally overall discipline and development,” he added.

Noel went on: “He (Peck) saw the pan movement and teaching people to play pan or having them involved in the steelband movement as a really good way of doing that.

The veteran St. Paul pan arranger recalled meetings that he had over the years with “Peck” on ways in which the pan movement could be enhanced on the island.

In addition, he said that he would always remember his fallen steelband colleague for “his astuteness and his excellence in what he did especially pan”.

Edwards was also a top athlete in the GBSS annual sport meetings and at Intercol in the 70’s and also made it on a couple of occasions into the semi-finals of the national calypso monarch competition and was also known in younger years to be a keen player of basketball and football.

Christopher “Pusher” Benjamin who was a foundation member of The New Dimension also paid glowing tribute to “Peck” on his passing.

In an interview with THE NEW TODAY, “Pusher” said that the late pannist always gave 100% in helping to advance the pan movement in the country.

He said that the former band leader of New Dimension was committed to the development of the pan as a musical instrument in Grenada.

According to “Pusher”, the late “Peck” played a pivotal role in venturing out of St. George on a regular basis to make sure that those bands in the rural parts of Grenada could improve and hold their own in competition against the more popular bands in the city.

“Pusher” recalled the year Rainbow City won the panorama competition in 2000 to break the stranglehold on the competition by the city bands with the help of “Peck” who took players from New Dimension to help the country band achieve the feat.

“It is our men he took and bring for Rainbow city to win,” he remarked.

New Dimension did not take part in the competition that year and its players were available to play with other steelbands.

Grenada has also lost within the past 24-hours another of its sons, Vernon Thornhill of Morne Jaloux, St. George’s who passed away Saturday in New York.

The 72-year old Thornhill was associated with the musical band known as the Armands 8 which played at many parties around the island in the 1970’s.