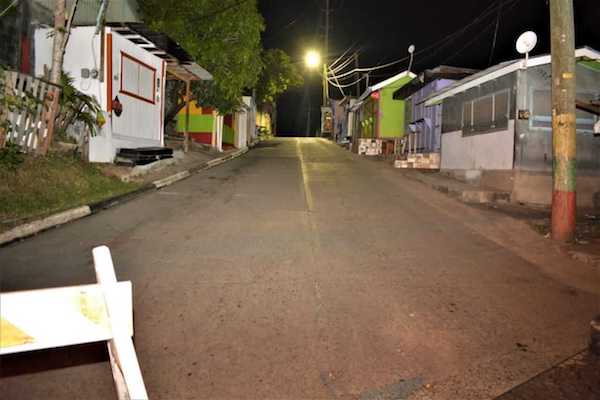 The hot spot area known as “Saigon” was very much deserted due to the ongoing 14-day Covid-19 curfew on the island.

With a slight smile but stern look on his face, one of the two police officers seen on duty at a check point in the parish of St. George on Christmas night said that he had not been forced to arrest anyone for violating the 9-hour curfew imposed by government to grapple with the rising Covid-19 figures in Grenada.

The officer spoke to a 2-member team from THE NEW TODAY who scouted the parish to ascertain whether locals were adhering to the curfew or taking things into their own hands.

The 90-minute drive through some of the villages told a story of people basically in compliance with the 8:00 p.m to 5:00 a.m curfew.

One night earlier on Christmas Eve, the police were busy in action dealing with a situation in the 4-Roads section of the city which is notorious for illegal activities especially drug peddling.

The police also had to crack down on another area considered “a hot spot” for illegal activities on the Carenage where gamblers were forced to scamper for shelter and a female shopkeeper had to be forced to close her doors for violating the curfew hours.

A drive by 4-Roads on the night of Christmas Day itself saw the place looking without any life as no one was seen in sight.

It was a similar scene in the Mt Rush area – another area of the constituency that at times is a trouble spot.

A resident told THE NEW TODAY that the presence of a senior police officer living in the village has helped to keep people inside during the curfew hours.

However, one man was spotted in the Jean Anglais area about 10:30 p.m on Christmas night but he soon vanished into thin air as the vehicle with its beaming headlamp approached him.

The popular hang-out spot known as “Wall Street” which is normally busy at night with persons selling barbecue chicken and pork and other fast food to patrons to make their living, was also deserted due to the curfew.

Less than a mile away, the trouble spot known as “Saigon” which is occupied by many hustlers including drug pushers was literally a ghost town as no one was seen in sight.

Four persons were spotted about 200 yards away from the main shops at Saigon on the side of the road eating what appears to be barbecue chicken.

Generally, the streets were largely deserted except for the occasional vehicle which passed by, mainly a police patrol.

THE NEW TODAY moved into the heart of Grand Anse Valley, an area occupied by mainly squatters where music and the pounding of domino could be heard emanating from inside a building.

A quick survey of the area soon showed that the activities were coming from a house located about 50 yards from the main road as persons were seemingly in a festive and joyful mood enjoying their Christmas night.

Grenada’s Covid-19 figures are now estimated at 107 – jumping from around 41 just over a week ago mainly due to the discovery of a cluster allegedly involving the Sandals/La Source resort in the south of the island.

Following is the interview conducted by THE NEW TODAY with a policeman on duty Christmas night at one of the check points in the south of the island:

NT: Did you find anybody tonight who violated the curfew hours?

Policeman: I would say minimal.

NT: What did you all do – give them a warning or so?

Policeman: Yes, we will stop certain persons and tell them about it, remind them of it. Sometimes we bounce up the same person a second time.

NT: What do you do then?

Policeman: If the softer approach is not working then you have to use the hard one.

NT: What do you do – do you detain them or charge them?

Policeman: We take them into custody.

NT: Was anybody taken into custody tonight?

Policeman: No – not tonight

NT: Officer, how scared are you to arrest a man because of Covid?

Policeman: That’s why I say the soft approach is the one but if it reaches to the stage where I have to then the hard approach – I have to do what I have to do.

NT: But I myself might be afraid to arrest a man because of this Covid thing.

Policeman: If a man don’t want to go he has to go. What could be easier is like you take the person’s information and you Summons them to come to court.

NT: But how do you know the man is really John Brown?

Policeman: You ask them for a form of identification. If they do not have then it might be difficult but you have to try different methods to get around.

NT: Thank you very much officer… but let me say that so far we have met some very pleasant police officers at the different check points and they are very co-operative with us. Have a good night officer.