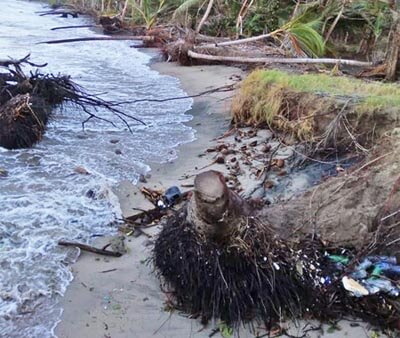 Sections of beach erosion in the Mt. Craven/Mt Rodney area

While Grenada, like other small island developing states, is vulnerable to the negative impact of sea level rise attributed to Climate Change, the Interim Leader of the National Democratic Congress (NDC), Adrian Thomas has described coastal degradation along the North eastern coast of St. Patrick “as a man-made disaster.”

Thomas expressed this view last Saturday during a visit to the gradually depleting coastline at the Mt. Rodney Bay, caused by heavy waves due to the diversion of rough Atlantic waters by a 1500 foot stone core structure that was erected in the water as part of the EC$4.6 Breakwater Project, stretching from the shore just under the Sauteurs Catholic Church or Leapers Hill, moving out to the sea onto the old Sauteurs jetty behind the fish market.

The Sauteurs Breakwater project was intended to prevent beach erosion by protecting the coastal zone.

However, while it may have achieved its objective to reduce wave energy on one hand, it has led to the creation of another degradation problem further down the coast ultimately affecting the lower Mt. Craven community.

Pounding waves have also exposed some Amerindian skeletal remains, which underwent emergency evacuation by foreign archaeologists last February at a burial site said to have remained undisturbed for over 1000 years.

The Interim NDC Leader chided the Keith Mitchell-led government for its lack of urgency in addressing the challenges resulting from the project stating, that “this is really not a natural disaster, this is a man-made disaster and I really wish and hope that the government would act a little more mature and show a little more urgency in dealing with the matter”.

“I think the people in St. Patrick – they are crying out and they need to hear from the government a little more…because for the last two or three years, based on the information that I have gathered from the people in the community, they have lost as much as 12 – 20 feet of land in some areas and they are anticipating that in the next two or three years they would loose another 25 feet..,” Thomas said in a message which was broadcasted on the NDC Heart Beat radio programme on Sunday.

NDC Caretaker for St Patrick West, Joseph Andall, who also formed part of the team that visited the Mt Craven/Mt Rodney area last Saturday to see the coastal damages firsthand, accused the ruling New National Party (NNP) government of “rushing into the project for political mileage,” noting that “a project of such magnitude needed to be properly planned and prepared for”.

“There needed to be a proper environmental and social impact assessment done before project implementation (and) none of that was done,” Andall recalled.

He went on to say: “They (NNP) rushed into that project just prior to the 2018 elections for the sake of gaining cheap mileage and in the process they managed to save a couple of buildings…in the lower part of the Sauteurs Town but then the people of Mt. Craven (and) Mt. Rodney…are being asked to pay the price for the recklessness of the NNP regime.”

Andall made the charge two days after Prime Minister Mitchell revealed plans to undertake a costly environmental assessment of the area and provide financial assistance to residents who are directly affected.

“We are taking steps…in fact, we are going to Cabinet to do something…to provide some direct financial support for the movement of those persons and to do some immediate work to protect that section of the land but we are also looking at a serious study to decide on some of the problems that we have had to ensure that it does not in fact create further difficulty for the people in the area…and that is what we have to do in any serious situation,” PM Mitchell told reporters during an interview last week Thursday.

“So, we may have learnt a lesson from the Breakwater project and we will do what we have to correct it and move forward,” he added.

Dr. Mitchell also noted that “there were studies done but clearly, from what we have seen there has been some damages and we can’t say the exact reason.”

The Breakwater project, falls under the NNP government’s Disaster Vulnerability Reduction Programme and was expected to transform Grenada into a gateway to the Grenadines.

It also forms part of the 2016 Grenada: Blue Growth Coastal Master Plan and was expected to encourage investment in a marina project, ferry terminal, yacht charter, hotel, villas, commercial buildings, and community space, with the overall aim of increasing employment in the north of the island.

A Country Poverty Assessment Survey done in 2008 concluded that the highest incidence of poverty (56.67%) on the island was manifested in the parish of St. Patrick.