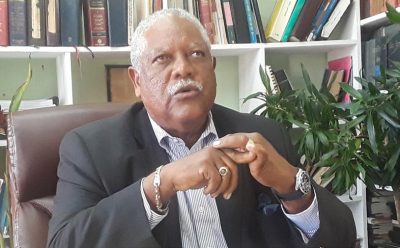 At least one farmer has called for the establishment of an insurance scheme to protect farmers against loss of crops resulting from risks such as natural disasters, praedial larceny and vandalism.

The call was made last week Wednesday by Barrister-at-law Anselm Clouden, who is a very active farmer on the island with several acres under cultivation in the St. David area.

Speaking to reporters at his law office on Lucas Street last week Wednesday, Clouden expressed the view that there is a critical need for farm and fishing insurance on the island in light of what he described as a “very stressful development” in which both farmers and fishermen had huge losses in their investment.

Two weeks ago, one farmer in River Sallee, St. Patrick lost hundreds of dollars worth of crops including melons and cantelopes through vandalism.

According to Clouden, the distressed farmer “has no recourse…no insurance to protect against the risk of vandalism…so the farmer when he suffers losses, sometimes by acts of God, he remains unprotected”.

“We are in a modern time, in a modern age. You have the cocoa and nutmeg associations particularly geared for export and as a farmer, we too need protection, those of us who produce nutmeg, cocoa, cinnamon and the like,” he said.

Clouden stressed that he himself has suffered loss of crop to unforeseen circumstances.

He also told reporters that there is also need for fishermen to have insurance coverage referencing another recent incident of piracy at sea, in which local fishermen were robbed of their catch by persons suspected to be Venezuelan pirates.

“Now, the fish was taken, equipment was taken,” Clouden pointed out, noting that there have been several other instances in the past at sea involving local fishermen.

“I have had the opportunity to speak with a group of fishermen in this regard where there has been piracy on the high sea, allegedly by Venezulans…a protest was made but there was no compensatory package to the fishermen,” he said.

“For example, if there is a collision at sea (and) you have persons injured, it could be with a passenger ferry (or) a fishing boat, there is no insurance for the fishermen to protect them against such eventuality but as a group, we can access insurance…and if the insurance companies here are reluctant to insure farmers with crop insurance (and) likewise the fishermen, they can search for other insurance companies overseas in Trinidad (or) Barbados as the case may be,” he added.

Clouden went on: “One farmer can ill-afford to insure his crop but collectively you can have group insurance so that in times of floods, hurricanes, vandalism, praedial larceny, the farmers’ crops would be insured against such risk.

“It is very similar to your car – you insure your car so that in the event of an accident you would be compensated for the loss you sustained and the inconvenience (such as) loss of income (and) pain and suffering as the case may be,” he remarked.

Clouden also said the situation has become so critical that it presents a need for the farming and fishing communities to collectively approach the government on the way forward.

The attorney holds the view that “because government from time to time receive huge sums of money to subsidise these areas of economic activity, part of that money can go into a form of underwriting for the farmers to assist in meeting their monthly payment to the insurance company, so that all would be protected.”

“I think the time has come when the government ought to as a matter of urgent and pressing necessity, move in such a manner to enhance the farmers ability to secure group insurance,” he said.