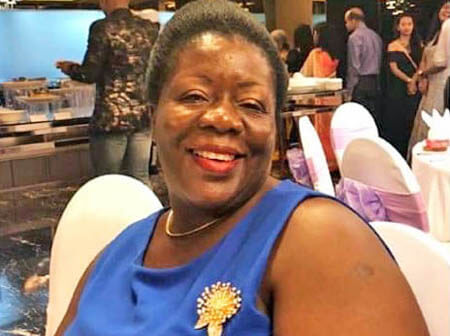 Gemma Bain-Thomas has finally gotten a little something

Faced with another possible court action that could see Acting Permanent Secretary in the Ministry of Finance, Mike Sylvester hauled before the high court to face contempt of court proceedings and jail time, the Keith Mitchell-led government has taken the first major step to try and finally pay off just over three-quarter of a million dollars owed to former Cabinet Secretary, Gemma Bain-Thomas.

Legal sources told THE NEW TODAY that one week ago, Attorney General, Dia Forrester sent a cheque for approximately EC$85,000.00 to Lex Fidelis law firm involving former Minister of Finance, Nazim Burke to cover the Vindicatory Damages awarded to Bain-Thomas by the Court of Appeal over the manner in which Prime Minister Mitchell illegally removed her from the post following his return to power after the 2013 general election.

AG Forrester is said to have sent proposals to Burke on government’s behalf to pay-off the larger amount of EC$675,000.00 awarded by the court in compensation for the former Cabinet Secretary for her unceremonious removal from the post by Prime Minister Mitchell.

A source familiar with the Bain-Thomas issue said that Attorney Burke was surprised in the manner in which the $85, 000.00 cheque was sent to his office late Friday afternoon as he had just sent to the Ministry of Finance the certificate from the court on the judgement debt.

Speculation is rife that the Ministry of Finance is mindful of the Order of Mandamus filed by another attorney-at-law, Anselm Clouden to commit Sylvester to the Richmond Hill prison for contempt of court over government’s failure to start making payments on a debt of EC$2.5 million owed to small businessman, Dorset Charles whose watersports business was illegally bulldozed on Grand Anse beach by a Mitchell-led government that came to power in the 1995 general election.

One day before the high court was due to hear the application for the Order of Mandamus against Sylvester, AG Forrester contacted Clouden’s law office to agree on a payment plan.

THE NEW TODAY understands that AG Forrester sent a proposal to Attorney Burke within the past week for a payment plan in the Bain-Thomas matter.

Burke is said to have turned down the offer and proposed instead that the October cheque be increased to EC$75, 000.00 and to pay EC$20, 000.00 a month until the sum is totally paid out.

According to the source, the law firm representing Bain-Thomas took the position that the monthly payment plan offered by the State “is making no sense” to its client.

He said that no agreement was reached between Burke and AG Forrester when the EC$85, 000.00 cheque from government suddenly showed up at Lex Fidelis law firm.

He indicated that the payment did not include interest payments on the Vindicatory Damages, as well as legal costs estimated at around EC$17, 000.00 as awarded by the court and is being treated as not acceptable from government at this point in time.

The source told THE NEW TODAY that on March 4, Burke had applied for the Certificate of the judgment award to serve on PS Sylvester which was to be the fore-runner for the filing of a possible Order of Mandamus before a high court judge for him to be committed to the Richmond Hill prison if government did not honour the court judgment to pay Bain-Thomas.

He said that the law firm only got the certificate last week and Burke served the certificate on Friday on Sylvester and within hours the EC$85, 000.00 cheque was sent to Lex Fidelis.

Despite the proposal on the table for discussion with AG Forrester, Attorney Burke is said to be fearful that the Mitchell-led government might somehow renege on the deal so he decided to proceed with serving the certificate to the top official in the Ministry of Finance as a reminder that an Order of Mandamus could be filed on Bain-Thomas’ behalf at any time soon.