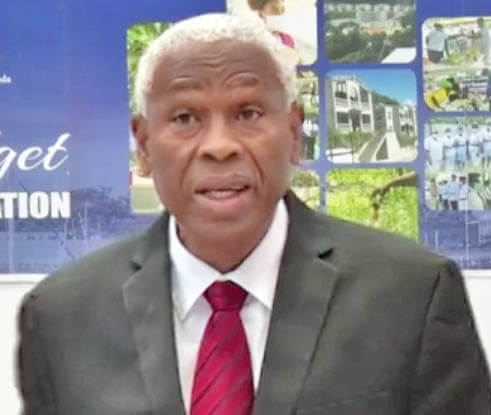 The ruling New National Party (NNP) government of Prime Minister Keith Mitchell is projecting a “6% growth in Gross Domestic Product (GDP) in 2021”, despite what has been dubbed the “worst economic downturn” in decades as a result of the impact of the worldwide COVID-19 pandemic.

Finance Minister Gregory Bowen made this announcement in Parliament on Wednesday in presenting the EC$1, 232, 670, 049, 2021 Budget of Estimates and Expenditure, his first since being replacing Prime Minister Mitchell in the Finance portfolio following a Cabinet reshuffle in October.

Minister Bowen told a Joint sitting of the House that the agriculture, construction, wholesale and retail sectors are expected to drive the return to positive economic growth in the coming year.

He said the other key sectors like tourism and private tertiary education (which) are projected to recover much slower will also play a part in the projected growth.

However, he said, “notwithstanding this relatively strong rebound on GDP the nominal dollar value of national output in 2021 will be below the pre-Covid-19 levels.”

“We project that the growth in revenues will remain flat next year, while some areas are expected to show modest increases many major tax types including the Corporate Income Tax and the Personal Income Tax will decline, given that they are based on the 2020 economic performance,” he added.

The senior government minister also spoke of plans to roll out an “expanded capital investment programme” to support economic recovery and job creation, indicating that more than 4000 jobs would be created as part of government’s infrastructure development plans.

Minister Bowen disclosed that the 2021 budget will be financed by the National Transformation Fund (NTF).

However, THE NEW TODAY has seen a document in the name of the island’s Attorney General, Guyanese Darshan Ramdhani which points to a bill to be taken to Parliament to give authorisation to government to borrow EC$330 million to finance the budget.

According to the document, the cash-strapped Mitchell administration will attempt to raise the funds from several different sources including the International Development Association (IDA), International Bank for Reconstruction and Development (IBRD), Caribbean Development Bank (CDB), Eastern Caribbean Central Bank (ECCB), the Regional Government Securities Market (RGSM), and other companies, banks and or financial institutions.

Minister Bowen said that government will be invoking Sections 10 and 8 (3) (f) of the Fiscal Responsibility Act (FRA), which provides the latitude to effectively administer the affairs of the country in the event that there are global factors that may hinder the normal operations of the economy.

This is a clear hint that the administration is about to engage in borrowing above the limit set by the FRA.

In an interview with THE NEW TODAY, following the budget presentation, Minister Bowen indicated that “funds set aside for resilience” under the NTF will be used to finance the 2021 budget.

“The budget is financed from monies that are being set aside for resilience…even if we have to take some hardship and not spend today to ensure we have a buffer that is what we have done; so, we have gotten things from the buffer and we will now be financing from the National Transformational Fund (NTF), what would come in and what we have in reserve,” he said.

“That’s how the budget will be funded even if we cannot collect as much as we want to expend from internal resources,” he added.

In commenting on the Budget in an interview with reporters following the presentation, Leader of the Opposition in Parliament, Tobias Clement was skeptical of the 6% growth in GDP projected for the coming year.

“They are projecting 6% growth, in this time, that’s a stretch but we will see,” he said.

“I do believe that we did well but the proof of the pudding is in the eating. It’s a big budget – very comprehensive budget (and) if all the plans and programmes that are in there, if they are implemented, my question is where are we going?

“I mean with the size (and) scope of the budget it seems that if I have to make a prediction I can almost say it’s an election year budget”.

Clement had earlier told Parliament that he is not prepared to make his contribution to the Budget, when Parliament resume today (Friday, December 4, 2020), and requested more time to prepare his response, which was permitted according to the Standing Order governing the process.

“What I am seeing is some super ministries and some ministries that are diminished and that would be addressed in my budget presentation,” he remarked.

The Interim Leader of the main opposition National Democratic Congress (NDC), Adrian Thomas echoed the sentiments of the Opposition Leader that “the budget comes across like an election budget.”

“The budget is basically based on loans and grants…they are not paying attention to the productive sector. They are still hoping and praying that SGU (St. George’s University), will bring back face to face classes and are still bent on seeking more hotels and (on) building that particular industry,” he said.

According to Thomas, the nation’s farmers would be “disappointed” with the allocation for agriculture.

“In this Covidious times, they ought to have known that they have to give the people some relief, some hope and try to build Agriculture,’ he said, noting that $18.M for Agriculture is just not enough.

“They ought to have known that the farmers would not be satisfied,” Thomas declared.

However, Farmer’s representative in the Senate, Roderick St. Clair, had a different perspective and expressed the view that although “agriculture is almost at the bottom of the table (amounting to only) 1.5% of the total budget, the Finance Minister spoke of various connecting activities that would benefit Agriculture significantly”.

“So, at the end of the day it adds up to about EC$40M, he said, “So, if agriculture is about $40M and it involves those connecting activities; so, for example if you have feeder roads, whilst it may be a matter of construction and infrastructure, if feeder roads deal with agriculture then, let’s say it’s an agricultural project but the project would be managed by the Ministry of Agriculture if that’s the case and so, I think we need to relook how we do those things,” the Senator added.

Also criticising the budget was former operative of the Keith Mitchell-led NNP, Terrence Forrester, who described the projections as “wishful thinking.”

“We are not going anywhere. The government has not shown in the budget that it is now serious about creating employment, especially for the young people (and) it is an unfortunate atmosphere at this point in time in Grenada”.

“The government needs to put money where it is needed. Our unemployment rate needs to be reduced via serious economic development taking place.

Consider the fact that the government is boasting of how many tourism projects at this time – this is not the direction in which we ought to be going”.

“Tourism is fine but we need to understand what is happening in the tourism sector today. They are boasting about how many jobs that are going to be created and SGU, when it comes back on stream (but) who is to know when SGU is going to come back on stream”.

“We have allocated monies to sectors that are not going to produce real jobs for unemployed people at this point in time because our unemployment is continuing to rise and in the midst of all of this, the minister is projecting 6% growth”.

“I don’t know where that money is going to be coming from (because) to be quite honest, we are dependent on outside economies.”