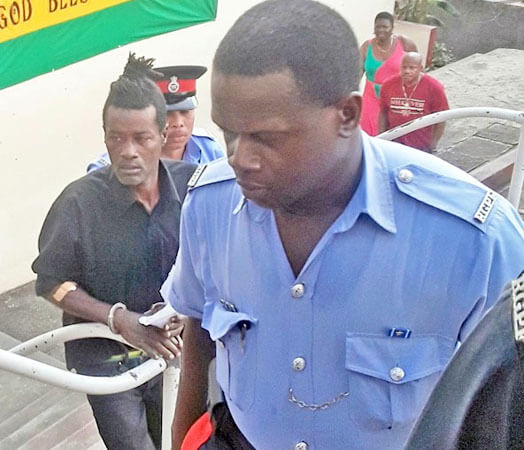 Approximately one (1) year and two (2) months after using his bare hands to fatally strangle his 68-year-old aunt at River Road, St. George businesswoman Patricia Honore to death, 44-year old Keith Pierre has been sentenced to 44 years and 10-months to the Richmond Hill Prison.

The sentence came approximately one (1) month after Pierre entered a guilty plea to the indictable charge of Non-Capital Murder brought against him by the State, in connection with the death of the elderly woman, affectionately known as ‘Patsy.’

The matter was prosecuted by Senior Crown Counsel, Howard Pinnock of the Office of the Director of Public Prosecution (DPP), who informed the court of the facts in the case.

The body of the woman was found by her son on January 30, 2020, inside a barrel underneath a bag of old clothing, and two (2) concrete blocks inside the downstairs apartment of a two-story house where Pierre resided at the time of her death.

The court heard that the two-story house, which became the subject of one of the first murder investigations to be conducted in 2020, belonged to Pierre’s deceased father, a former fisherman, who passed away while he was in jail.

The altercation between Pierre and the deceased surrounded property entitlement and who had ownership of the house where she had been occupying the upstairs apartment, along with her son, and had allowed him to stay on the ground floor when he came from prison.

Pierre told police investigators that he was upset to find that his aunt and her son had occupied the house because he had planned to put the upstairs up for rent after serving his time in prison.

Police investigators said that Pierre admitted to strangling his aunt on the day in question, using his hands to lock her neck from behind as she turned to walk away from him after she refused to allow him to use the upstairs bathroom.

A psychiatric evaluation report confirmed that the convicted man, who was 44-years-old at the time of the brutal killing, does not suffer from psychiatric illnesses and knew exactly what he was doing at the time.

Pierre’s Social Inquiry Report was very telling as persons within the River Road community, pointed to his terrorising behaviour, some even expressed the view that he had killed the only person in the community who really cared about him and ensured that he had a decent meal every day.

The convicted man who has been in and out of prison since 1992, has a rap sheet of over 42 prior convictions, mostly for drug-related and stealing offenses.

In an interview with THE NEW TODAY on Wednesday, American-trained Attorney-at-Law, Jerry Edwin, who represented Pierre in the matter, mitigating for discounts to be awarded to him for his early guilty plea and expression of remorse to the court, noted that Justice Gilford was “unimpressed” and “unmoved” by Pierre’s statement of contrite and instead focused on the method and manner in which the victim lost her life.

“The fact that she was vulnerable, that he choked her while her back was turned, dragged her after she passed out down the stairs, stuffed her in a barrel and put a bag of old clothes and two blocks over her in the barrel, went back upstairs, sat down and ate two oranges and then went out and took a smoke, the judge saw that this conduct was wanton, malicious and grievous, and she decided that Keith Pierre did not deserve a reduction or a discount based on an early plea and remorse,” said the attorney.

“To say the least, this was a gruesome offense, and the family of this poor lady, I am sure their suffering and grief is not over. Unfortunately, Mr. Pierre had a long career of being on the wrong side of the law and it is perhaps inevitable because he did not seek any change in his previous behaviour that he committed the ultimate crime.

Edwin went on: “I think the 40 plus convictions that this man had over the last 30 years of his life is an indication that he never took any step to walk on the right side of society and of the law. I must say that this is a case where no one in River Road, not one single person had anything salutary to say about Keith Pierre.

“The neighbours expressed fear of him and were relieved when he was arrested for this offense. So, he would be a very old man when he is released from prison. Hopefully, he would use the time to reflect on the life that he has led but even more importantly his life is not over of course and there are many ways in which he can apply himself productively and he has to find a way to do that because the court has mandated counseling during the 44 and a half years that he would be spending at Her Majesty’s Prison and we pray that society at large and those persons who opt for a life of crime will take heed and upend their conduct,” said Attorney Edwin.