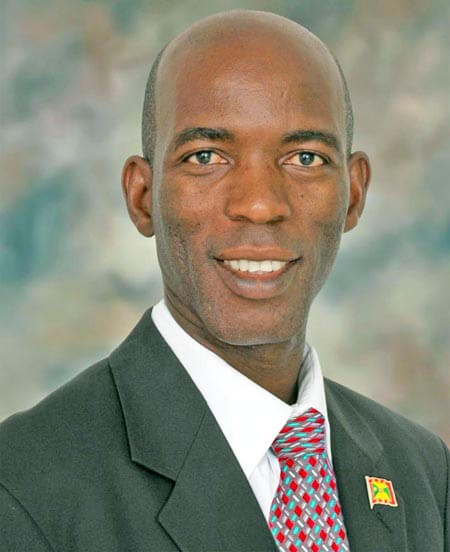 Tobias Clement – explains the manner in which lotto gives assistance

Opposition Leader Tobias Clement is sticking to his guns that funds from the state-controlled Grenada National Lottery Authority (GNLA) were used to help a food hamper distribution drive by retired New York policeman, Nimrod Olivierre who is trying to get the nod from the ruling New National Party (NNP) to unseat him in the St. George North-east constituency in the next general election.

Clement was responding to a denial from Olivierre and his camp that he received money from Lotto to help put together the hamper initiative which included free hams to persons in the constituency.

Olivierre’s wife is insisting that he did not receive any cash from Lotto and that he spent “over US$15, 000.00 of his own money to purchase food for the constituency”.

A member of his team was heard in a video clipping stating that the ex-policeman who has returned from New York to live permanently in Grenada was the person behind the Food Distribution drive and “came up with the majority of the foodstuff and the Government of Grenada in co-operation with the National Lottery Authority”.

Clement told THE NEW TODAY that he paid careful attention to the response given by Olivierre’s wife after the article came out in last weekend’s edition of the paper.

In responding to the article, the wife said, “…Mr. Clement is right, it (lotto assistance) has to be passed through the MP, if facts were checked, THE NEW TODAY would have found out that it was”.

Clement said: “…I do not think the lady has a clue as to what happened. She said that the whole NLA transaction went through the constituency office system but she failed to realise that the office in New Hampshire is not a constituency office – that’s an NNP/Keith Mitchell office.

Clement who won the seat in the 2013 and 2018 general elections on the NNP ticket broke ranks from the party just over a year ago and crossed the floor to become Leader of the Opposition in the Lower House.

THE NEW TODAY understands that Prime Minister Mitchell will use the NNP Constituency Office in New Hampshire on a regular basis to meet with villagers.

According to Clement, it is clear that those running the NNP office in New Hampshire want to treat it as the defacto constituency office for St. George North-east and to totally leave out the legitimate MP with the Constituency office out of the picture.

Clement said that anyone listening closely to the video would realise what the Team member for Olivierre was saying about the role of lotto in the Food Hamper issue.

The MP pointed out that GNLA will give the money not in cash but in the form of a Food Voucher redeemable at some business place.

Clement said: “It is still money. Lotto never gives you cash. They ask you which one of the entities that you want to deal with and then they will send the cheque directly to the entity. So, lotto did not give them tickets – it gives them cash in the form of a voucher which should not have happened.

“It (the lotto involvement) has political implications for a government entity to a would-be candidate. How is that possible? Only under Keith Mitchell?”

Clement told THE NEW TODAY that he would not have objected to Olivierre’s initiative to give Food Hampers if it was done in the right and proper manner.

“If lotto had come to me and say to me that they were going to give the guy or let the guy do it – it is food for poor people and I would not have objected to it,” he said.

“…If they did not put out the video I would not have known – they say loose lips sink ships and that was one of them,” he added.

THE NEW TODAY understands that Olivierre has given up his status in the United States to meet the requirements set by the Grenada Constitution to qualify as a candidate to contest general elections on the island.

Under the law, only citizens of Grenada and the Commonwealth can run in national elections.