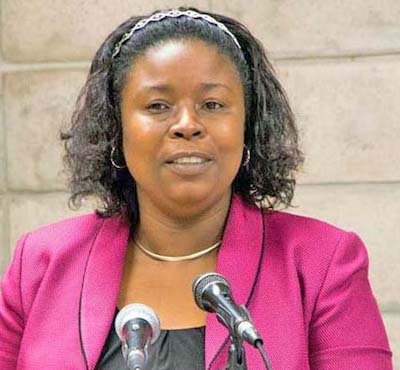 Minister Delma Thomas - made the announcement in Parliament

The Keith Mitchell-led New National Party (NNP) will deliver 10, 000 bathroom and toilet facilities to vulnerable and marginalsed families in the upcoming year, according to Minister of Social Development and Housing and Community Empowerment, Delma Thomas.

In making the announcement during her contribution to the 2020 Budget debate in Parliament last week Thursday, the minister said that this will be done in keeping with the focus of the National Sustainable Development Plan (2020-2035) to promote balanced, harmonious and inclusive development in the country.

Minister Thomas spoke of plans to embark on a project that will give grants in undisclosed sums to thousands of homeowners currently using pit latrines to enable them to construct bathroom and toilets with potable water.

She told Parliament that funding for the project will be done through an additional “EC$5m” allocated to her ministry in the 2020 Budget.

The Ministry of Social Development, Housing and Community Empowerment is earmarked to receive an allocation of $46, 766,603m for the upcoming year.

Informing Parliament of the initiative under her ministry, Minister Thomas pointed out having an “inside bathroom and toilet is a basic human right”.

“…We are seeing a significant shift from pit latrine to toilet and bathroom. It is a health hazard and we must get rid of health hazards in our communities,” she declared.

The female minister anticipates that there will be some challenges to implementing the project for some homeowners, identifying issues surrounding land ownership for erecting the concrete structures because not everyone owns the land where their houses have been erected.

However, she said the plan by government is to install “10, 000 bathroom and toilets” throughout the tri-island state.

The bathroom and toilet initiative is being undertaken in keeping with the United Nations Sustainable Development Goals (2030), which calls for urgent action on the issues by both developed and developing countries.

She said the project is intended to put an end to poverty and other deprivations, improving health and education, reduce inequality, spur economic growth and at the same time tackling climate change and working towards preserving the oceans and forests.