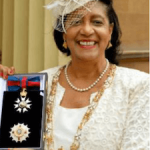 On the 47th Anniversary of our Independence from Britain on February 7, 2021, Grenadians, and allies both at home and in the diaspora met on a virtual forum titled “Reclaiming Grenada’s Cultural Sovereignty.” The forum was coordinated by The Grenada 2050 Project and featured scholarly presentations by Dr. Nicole Phillip-Dowe, Professor Martin Felix, Mr. Angus Martin and moderated by Dr. Paul Clement.

During the forum, there was spirited discussion over the offensive names and symbols that litter Grenada’s cultural landscape and heritage. One such symbol is the royal insignia worn by Governor-General Dame Cecile La Grenade, the British monarchy’s representative in Grenada. The insignia of the Dame Grand Cross of the Order of St. Michael and St. George “depicts the archangel St. Michael trampling the neck of Satan.” Undoubtedly, this insignia represents nothing more than the white supremacists’ belief that the white man is good and superior, and the black or dark-skinned man is bad and inferior.

Attendees were appalled and disgusted upon seeing the racist image depicted on the medal. Buttressed by the escalating global rejection of the use of objects and symbols that normalize black peoples’ continued degradation, The Grenada 2050 Project wrote to our Head of State by email on March 1 and again by regular mail on April 1, 2021 strongly recommending that the Governor-General follow her other Caribbean counterparts and immediately cease using the royal racist insignia of the Order of St. Michael and St. George. On both occasions, we furnished a copy of the letter to the Prime Minister and the President of the Senate.

To date, we have not received a response from our Head of State or any top government officials. This lack of response is unacceptable, unreasonable and insensitive, and we urge the Governor-General to do the right thing and immediately suspend the use of the racist medal.

Would our ancestors want us to honour and glorify the European racist tyrants who trampled them with more than boots on their necks in our country today? We think not. This insignia is offensive towards descendants of our African ancestors, and we as Grenadians must stand together to demand that our Head of State reject the use of this racist medal without further delay.

We cannot stand by any longer and allow our Head of State to perpetuate a history of national oppression, horror, and violence.