The Doctor of Statistics, the man that Grenadians have nicknamed “STONE”, has been effectively using his training and experience in the field of Statistics to play a game of numbers. It is all a game, designed to mask and conceal the true state of our finances and the depth of our poverty.

It is all a game that desperately seeks to divert our attention from the destructive and shady deals that he is doing with the Chinese, deals that are sending Grenada rapidly down the path of Zambia. Yes, it is the Game of Stone.

When the Prime Minister and his gangs in Cabinet and Parliament say to us that the USD63 million to pay for the WRB shares was obtained from savings from the Capital Budget over the years, I say nothing can be further from the truth.

These jokers need to stop fooling themselves and stop making a mockery of the budget system and our laws that they themselves passed in Parliament. These con men need to review what Stone said to us all in his budget speeches over the last 6 or 7 years, especially the parts on the Capital Budget and its performance.

Budget Principles
(1). Budget estimates are similar to someone getting a loan to build a house. That person cannot touch the approved sum unless the lender verifies that a certain quantity of work is done and that accountable sum is drawn down from the total approved. The borrower cannot take away the “savings”, if the overall project does not cost as much as the estimated total, and spend it on something else.

Also, if you realise “savings” on your project you are happy because you are in less debt, you have to pay back less.

(2). In addition, Budget estimates are just what they are named: estimates. One has to then look in the next year’s budget at the actual performance or the outturn, to see what actually took place with the plans or estimates in the previous year’s budget.

PROVIDED THAT THE NUMBERS ARE PROPERLY AUDITED OR VERIFIED!

(3).The numbers that are presented by the Minister of Finance every year are simply unverified figures from the persons who serve at the behest of the Minister at the Ministry of Finance. They are figures that are not to be relied upon until they are checked or verified independently. This verification is to be done by the Director of Audit, a post that is protected from political interference by our Constitution.

Since the infamous case of Julia Lawrence, when last has there been a definitive appointment to the post of Director of Audit for any significant period? Our laws, especially our new financial laws that were negotiated with the IMF/World Bank team which enabled Grenada to receive tens of millions in grant funding, which our Prime Minister has boasted about over the course of the Home-Grown program, has set out procedures that have been consistently ignored by Stone and his gang.

My team and I at Legal Affairs personally had a hand in negotiating and drafting them with World Bank/IMF lawyers.

Yes, the PFMA was passed by Keith’s administration in 2015 in order to be able to receive tens of millions in grant and loan support for Keith’s so-called Home-Grown program. Sections 66 and 67 of the PFMA set out the mandatory or compulsory regime for our Public Accounts. All of them! Even the National Transformation Fund, (NTF), which holds the money from the sale of Grenadian passports.

Section 66 of the PFMA says that:

Section 67 of the PFMA says that:

No Audited Reports
This is just what happened with the Julia Lawrence case where the duly qualified and duly appointed Director of Audit submitted her report and Keith Mitchell, the Minister marked it up with some very nasty comments. I want him to now sue me for saying that it was certainly he who marked up the report submitted by Julia! I was Keith’s Permanent Secretary over the relevant period.

When last have we had Audited Reports of our public accounts? Certainly not since 2015 when we started putting this new set of passport money into the Treasury!

I understand that the last one was done before the PFMA was passed.

Keith Mitchell has been most reluctant to appoint a Director of Audit since he was burned in the Julia Lawrence matter. Our Prime Minister continues to flagrantly violate the provisions of our Constitution and other laws regarding the auditing of our accounts.

Section 82 of our Constitution says:

(1) There SHALL be a Director of Audit whose office shall be a public office.

(2) It shall be the duty of the Director of Audit to audit and report on the public accounts of Grenada,…

Keith Mitchell is scared because of section 82 (6) of our Constitution:

(6) In the exercise of his or her functions under subsections (2), (3) and (4) of this section, the Director of Audit shall not be subject to the direction or control of any other person or authority.

Keith cannot afford for an independent person to be overseeing his financial conduct so he does his utmost to use his power to ensure that no Director of Audit is fully appointed. They are all in “Hollywood”! All acting for most of their time so he can manipulate and control them!

(6) A person holding the office of Director of Audit may be removed from office only for inability to exercise the functions of his or her office (whether arising from infirmity of body or mind or any other cause) or for misbehaviour and shall not be so removed except in accordance with the provisions of this section.

He continues to use this “consultation” to block a definitive appointment because he knows that once appointed, the person must act independently and cannot be easily removed.

The numbers that are presented by the Minister of Finance every year are simply unverified figures from the persons who serve at the behest of the Minister at the Ministry of Finance. They are figures that are not to be relied upon until they are checked or verified independently.

Let me now prove how unreliable the numbers are below in this Game of Stone!

I have spent the last 2 weeks going through every available budget speech, estimates and other documents going back to 2015.

The numbers represented below come from official documents from the Ministry of Finance and official government publications. They are not my numbers, they are the numbers of Keith Mitchell and his gang. The numbers relate to what they have stated about Capital Expenditure over the last 6 years or so.

The inspiration for my dedicated work came from the speech of Winston Garraway at the Senate sitting of January 27th 2021 where he stated, upon a challenge from an opposition senator, that the savings will be proven at the Public Accounts Committee meeting.

YOU CANNOT HAVE ANY PROPER PUBLIC ACCOUNTS COMMITTEE MEETING WITHOUT VERIFIED AND AUDITED ACCOUNTS, SIR!!!!

Current Estimate represents the figures posted in the budget estimates for that year.

Actual represents the figures posted in retrospect in later budget speeches and estimates.

Other represents various other statements about the said expenditure as indicated. m represents millions. 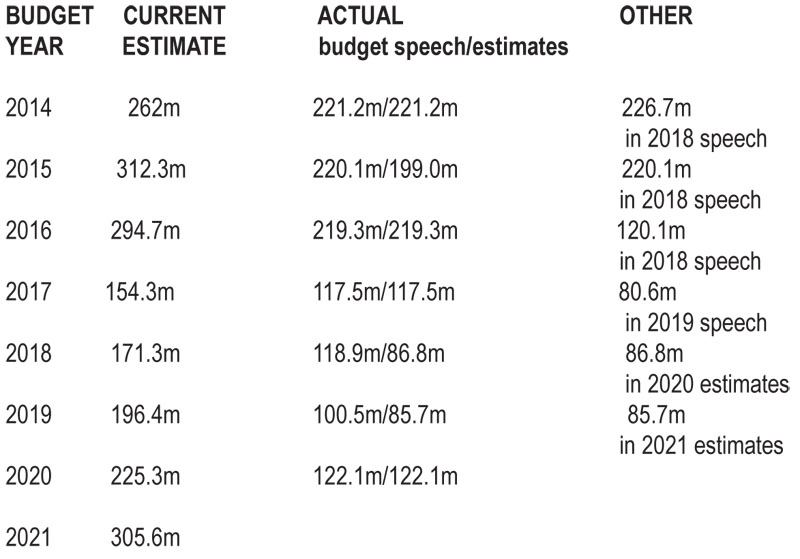 The published numbers keep on changing and shifting from speech to speech and document to document. The above analysis shows that, as a nation, we have been “played” by Dr. Stone over all these years.

More particularly in the absence of audited accounts, Keith Mitchell has simply been using whatever numbers he deems fit in order to serve his own devious purposes.

I remain concerned about the use of the money which belongs to the NTF.

Section 76 (3) and (4) of our constitution are reproduced below:

(3)   No monies shall be withdrawn from any public fund other than the Consolidated Fund unless the issue of those monies has been authorised by or under any law.

(4)   Parliament may prescribe the manner in which withdrawals may be made from the Consolidated Fund or any other public fund.

My question is this: Where is the law or prescription that allows this administration to withdraw monies from the NTF?

Now, allow me to use a few parables:

To members of the

a.  Keep your legs closed, you are not jeans, just a frock and cannot cover up well;

b. You are a watch dog that has been installed to bark; if you don’t bark you are useless and misleading and aiding and abetting;

c. To you I say, 2 words; “Remember Peter”; he thought he might have been Peter the Great, eating caviar out there, but has ended up as Peter, Peter, the pumpkin eater, eating just pumpkins from the agricultural fields;

d. You may be middle aged and tired of struggling, looking for a fat appointment somewhere else from World Bank, IMF, CDB and so on, but remember our youths and our children!

The NTF appears to be the virtual “cash cow” of this NNP administration. The backbone of our economy, certainly the capital Budget, is the NTF whose funds are derived from selling our citizenship, our identity, our national pride for a few dollars. Several of the recipients have been shown to be crooks and con men and there is still the outstanding issue of whether these unknown citizens are able to vote.

Below is the unaudited numbers showing the percentage of the Capital Budget that has been funded by the NTF. These values do not reflect the contributions to the recurrent budget:

How have the mighty fallen!

We have moved from being a tiny nation that was proud enough to stand up to the mighty USA and declare that we are proud and independent; to a simple, poor, begging country who may soon become a colony of mainland China, a Caribbean Zambia! The subjugate of an old colonial power!

Maybe we NEED an invasion by the USA to stop the spread of communist China, not communist Russia or Cuba! The Chinese are now poised to own or dominate 3 major economic areas of our dear country:

Some of the comrades who worked hard to depose Eric Gairy are now supporting a dictator that is far worse than Sir Eric. Comrades, you shed blood or caused or helped in the shedding of blood, some of it of our own Grenadians, to topple Gairy and now look at whom you are propping up.

My friends in Parliament, in Fontenoy and in other places know who they are! It is time to look back at your legacy. In the words of Brother Bob, “now we’ve found out who are the real revolutionaries and who are the trickster mercenaries”.

Wake up Grenada and reject these incompetent tricksters before it is too late for us and our future generations!

Think on these things as we celebrate what is left of our independence, for which our forefathers fought so hard.

Cajeton Hood is a practicing Attorney-at-law who served as Attorney General during the 2013-18 rule of the New National Party government of Prime Minister Dr. Keith Mitchell